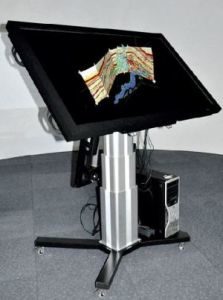 At the VRGeo Consortium December 2010 meeting, a novel multi-touch-based prototype for seismic interpretation was introduced. The technology used for the new system was nothing less but the world’s first true multi-touch capable Quad Full HD LCD display. It combines a very sharp 56” image of 3840×2160 pixels with a multi-touch technology featuring 32 simultaneous touches.

In addition to identifying and combining the technologies mentioned, the VRGeo R&D team also constructed on VRGeo Consortium members’ request a suitable assembly which resembles a drafting table. It enables easy adjusting of the display’s inclination. This way, the new VRGeo SeisTouch can be used both in a flat and bent table style with different angles.

Furthermore, in order to better exploit the capabilities of this hardware for seismic analysis, a new application was finally developed. It combines the possibilities of out-of-core processing using the Octreemizer® framework and slice-based analysis using parts of the SeisTouch application. Arbitrary seismic lines can easily be selected, visualized and annotated via multi-touch from a truly massive volumetric data set (100GB at 8bits per voxel) from the Norwegian sector of the North Sea.