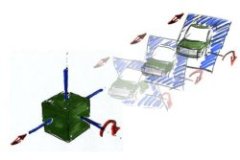 In general, Virtual Environments are not only viewers for an application but also include means for 3D interaction. We introduced a PDA-based, hybrid interaction and input/output device, which is especially useful in a multi-user context for instructor/learner sessions and for the differentiation of private and public data. We also designed a wireless stylus which is both, an interaction device and a digital pen for shared tablet PCs. For multi-user interactions we developed the bent pick ray technique dealing with the merging of multiple inputs and giving visual feedback on this process.